Select
Choose the pick-up and drop off dates
Select Delete

Car rental Split - The right car for you

Rent a car Split at ORYX provides you with the best vehicles, with the highest safety and service standards. With us, you can always be sure that your ride will go smoothly and completely relaxed!

We fulfill all your needs and desires and strive to exceed your expectations every time. With our Split car hire vehicles, your business trip or family weekend vacation, or even a simple daily city ride will be an experience to remember!

At ORYX, we always take care of every detail, and the entire process of renting and booking your vehicle is carefully designed to make your everyday life easier. All you have to do to book the car you want is to go to our website and choose your ideal car rental Split vehicle in just a few clicks! In addition, when booking, you can choose all the additional equipment you will need, as well as protective packages.

But this is not the end of our flexible and affordable service. As part of the online reservation, you can also choose in which ORYX car hire Split branch you will pick up the vehicle, as well as in which you will return it. And in case you want to change any aspect of your reservation later, you can also do it online, without worries and additional costs.

At ORYX you will always get a car that is regularly serviced and maintained. Besides, all our cars are equipped with air conditioning, and we also provide a range of top-quality accessories that you can get with the vehicle if necessary, such as child seat, GPS navigation or WiFi device. You need it? We got it!

Split car hire has never been easier, simpler, and safer with your faithful driving partner, ORYX Rent a car Split.

Why is ORYX Rent a car the right choice for you?

Find us at this location 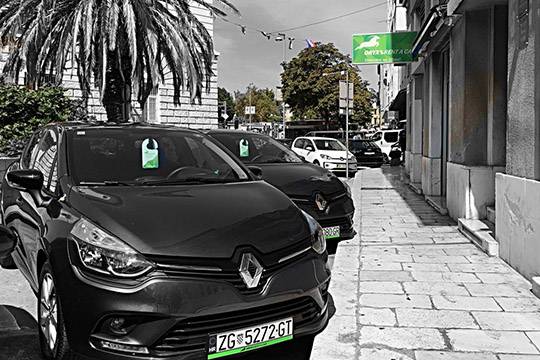 Split is one of the favorite and most visited tourist destinations on the Adriatic coast, offering something for everyone, from cultural and historical sights to rich nightlife and other entertainment.

If you came to the city by plane, then Split car hire is at your fingertips! Right at the airport, which is located about 20 km outside Split, in Kaštel Štafilić, there is our office with a wide range of cars tailored to your needs.

After a short break from the flight, head to our car rental Split office and leave it to the expert hands of our employees to help you choose the right vehicle for you, and to continue your journey carefree and safe. 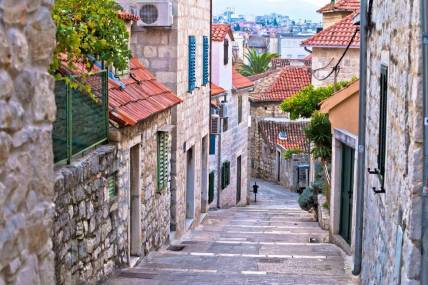 Split car rental - Where to park your car in Split?

Split is a large tourist center, so the traffic jams in the city center are common, especially in the summer months. And since the old town is a pedestrian zone, it is advisable to park your Split car rental vehicle in one of the public parking lots throughout the city.

Public city parking lots are divided into four zones, the fourth of which is the cheapest. Split also has many public garages, such as the Sukoišan garage, so you can park your vehicle there as well, with daily and monthly parking tickets being offered.

Split car hire - What to visit in Split?

Once you have safely parked your Split car rental vehicle in one of the public car parks or in the public garage, you are ready to head towards the center and start exploring this beautiful city.

The first stop is, unquestionably, the city center and Diocletian's Palace. Built in the late 3rd century, the Palace is one of the most significant Roman monuments in the world, and it also where some of the scenes from the world-famous Game of Thrones series were filmed. You can enter it through the famous Golden Gate - according to many, the most beautiful of the three main entrances.

Inside the palace is the Peristyle, the central square of Split, and the Cathedral of St. Duje, the oldest Catholic cathedral in the world, whose bell tower offers a beautiful view of the city. On the Peristyle, you can descend the stairs to the beautiful Split waterfront and enjoy a walk near the sea.

Walking west, you will reach Prokurative, the famous Split square where many cultural events are held, and not far from them is the Croatian National Theater in Split where you can watch great plays.

For an additional dose of culture and art, you can also visit the Gallery of Ivan Meštrović, the most famous Croatian sculptor, which is located a little further from the city center.

For all the football fans, there is the Poljud stadium, known for its shell-like shape. It is a place where the people of Split zealously follow the football matches of their favorite city club, Hajduk.

At the end of the city tour, if you want to take a break from the city noise and enjoy nature, we suggest you climb the hill Marjan. Split is often called "the city under Marjan", and its top Telegrin offers a beautiful view of the city and the sea.

Whatever your next destination will be, our car hire Split offices are here for you!

We offer a large selection of high quality vehicles, located in 5 cities, from central Croatia to the Adriatic coast, including cities Split, Dubrovnik, and Rijeka.